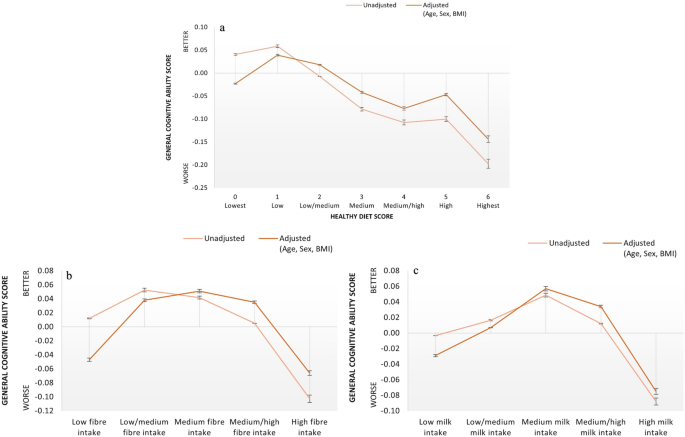 Unexpectedly, we found that higher vegetable intake was associated with worse general cognitive ability, but an association between fruit intake and general cognitive ability was lacking. Although these findings are not consistent with previous research showing positive effects of fruit and vegetable consumption, and/or adhering to diets in which these food groups are abundant, on cognition, see for a review7, they still could be explained based on the mixed effects of polyphenols on cognition. While some researchers observed a positive correlation between cognitive decline and the supplementation of different products rich in polyphenols on cognition, see for a review5, a recent meta-analysis concluded that some polyphenols might improve specific markers of cognitive status17, probably due to the (i) dual effects of polyphenols on the brain through prooxidant action18 and (ii) region-specific actions of polyphenols within brain structures19. Converging evidence comes from a study showing a positive association between high total polyphenol intake and language and verbal memory, but not with executive functioning; moreover, they also found negative associations between scores on executive functioning and intake of specific polyphenols including dihydrochalcones, catechins, proanthocyanins, and flavanols20. Similarly, a recent study also showed that adherence to the MED style diet (a diet rich in dietary polyphenols) was associated with better verbal ability but not with global cognitive function, visuospatial ability, and memory21. Given our general cognitive ability score is believed to measure processing speed, not non-speeded and verbal abilities14, these unexpected findings could be attributable to the lack of polyphenol effects on processing skills. Also, as our food group analysis approach might have failed to capture the interactive effects between multiple nutrients, food items and groups, the observed findings may simply reflect the simultaneous intake of another factor. Further research should examine the effects of various types and amounts of (i) polyphenol, and (ii) fruit and vegetable intake on various cognitive domains to uncover this complex and unexplained relationship.

Consistent with the results from previous reviews7,22, in the adjusted model, we showed the benefits of habitual consumption of fish and unprocessed red meat on general cognitive ability. As fish contains some essential macronutrients including protein and unsaturated fatty acids23 and as unprocessed red meat is a good source of protein, and B group vitamins24, our findings could be explained by the positive associations observed with cognition and (i) B vitamins, (ii) n−3 fatty acids, (iii) proteins, and (iv) dietary patterns that are moderately high in protein (e.g. DASH)5,7,25,26. Additionally, we observed a lack of association between processed meat intake and cognitive ability. Together these findings might reflect differential effects of protein quality (lean vs fatty) on cognition. Future research is warranted to examine the effects of not only protein quality (lean vs fatty), but also the source of protein (animal vs plant) on cognition. Specifically, exploration of potential neurocognitive effects of habitual consumption of non-animal sources protein (e.g. beans and pulses) is required. It is important to note that by using the same set of UKB cognition data, and analysing each component of cognitive ability score separately, Zhang and colleagues27 showed that red meat intake was negatively associated with UKB reaction time, UKB fluid intelligence, UKB numeric memory, and UKB prospective memory; but not with UKB pairs matching task. However, as they controlled for other variables including ethnicity, Townsend deprivation index, smoking, alcohol, education, physical activity level, sleeping hours, stroke history, and family history of dementia, general cognitive ability score might have been influenced differently by these covariates. Hence, more research is needed to explain our conflicting findings.

Although not consistent with previous research5,6,7, our finding showing a negative association between healthy diet score and general cognitive ability was not that surprising, given that (i) higher healthy diet scores represent higher intakes of vegetables, fruits, wholegrains; moderate intakes of fish; but lower intakes of processed, and unprocessed meat, and refined grains; (ii) we found negative associations between vegetable intake and general cognitive ability, and (iii) we found a positive association between unprocessed red meat intake. The discrepancy between previous findings and our results could be explained based on methodological differences. Firstly, it is possible that Lourida et al.’s11 healthy diet scores might not be applicable for multiple outcome variables, as different components of healthy diets might be beneficial to one aspect of mental health and wellbeing, but not another. For instance, by utilising the same healthy diet measure in another UKB study, we have shown associations between higher healthy diet scores and better sleep health and mental health10. However, in the current study we observed the opposite effect. Secondly, UKB’s FFQ did not measure nut, seed, legumes, and olive oil consumption, which are known to be some of the key elements of MED style diets28. Hence, the healthy diet score we utilised might not be sensitive enough to measure cognitive benefits associated with these crucial food items (and the whole MED diet). Thirdly, most of the studies that observed positive effects of MED on global cognition used well-known and validated measures of cognition (such as the Mini Mental State Examination…etc.), however, although validated in a previous study14, our general cognitive ability score might not (i) measure the same domains of cognition that the well-known global cognition tests measure and/or (ii) cover the full range of cognitive domains that the well-known global cognition tests cover. Finally, it is well known that not all cognitive domains are equally sensitive/responsive to food/diet29. Therefore, some, or all five, cognitive tasks included in the general cognitive ability score might not be sensitive enough to capture the effect of MED on global cognition. These methodological considerations highlight the importance and need for (i) creating well-defined/structured/validated healthy diet score/diet quality estimations, (ii) using validated cognitive tasks and (iii) identifying dietary components, and their mechanism of action, which might differentially affect different mental health and wellbeing components.

We observed a U-shaped relationship between cognitive ability and fibre intake, where lower and higher fibre intakes were associated with worse general cognitive ability. As low fibre intake also means lower intakes of vegetables, fruits, and wholegrains (hence lower healthy diet /Mediterranean diet scores) low fibre intake and worse general cognitive ability association is in line with previous studies showing negative associations between diet quality/health and cognition5,7. Given the role of dietary fibre consumption in lowering inflammation by modifying both the pH, and the permeability of the gut30; and the role of gut-brain-axis in cognition31; inflammation may be a potential mediator between the dietary fibre and the cognition curvilinear relationship observed here. In other words, moderate amounts of fibre may be beneficial for reducing or preventing inflammation (producing by-products which are beneficial for proper brain function), leading to an improvement in cognitive outcomes. Although supporting evidence comes from a review that highlighted the negative impact of higher levels of inflammation on cognitive processes, including memory, speed of processing, and global cognitive function32, future research is warranted to explain as to why high fibre intake might be detrimental to cognitive ability.

Milk intake and general cognitive ability also showed a curvilinear relationship, where both lower and higher milk intake were associated with lower general cognitive ability. As milk is a good source of protein and various group B vitamins, of especial importance for cognition5,7, it is clear why lower milk intake is associated with worse general cognitive ability. This finding is also in line with previous research showing associations between lower consumption of milk/dairy products and poor cognitive function, for a review see33. On the other hand, high milk intake and worse general cognitive ability association we observed, supporting previous findings that showed associations between (i) milk intake greater than 1 glass/day and greater cognitive decline34, (ii) whole-fat dairy intake and greater cognitive decline33, and (iii) saturated fat intakes from milk products and poorer global cognitive function and prospective memory35. Dietary saturated fatty acids36 and d-galactose37,38 in milk are known to cause systemic inflammation in humans and animals, respectively. Given the role of inflammation and the gut brain axis in modulating cognition31,32,39, these findings raise the possibility that higher milk intake, hence d-galactose and saturated fat intake, may cause inflammation and exacerbate cognition. Additionally, in the current study, we used Bradbury et al.’s13 milk intake estimation which is based on the questions on type of milk, bowls of breakfast cereal, cups of tea, and cups of coffee. Hence, these findings might also be partially attributable to the harmful effects of high doses of caffeine consumption on cognitive outcomes, or simply habituation, as higher doses might be required for habitual users to elicit better cognitive performance40.

It is also possible that, the associations with poor general cognitive ability and low (i) fibre, and (ii) milk intakes could be further explained by the impact of income on diet and dietary choices. Convergent evidence comes from observational studies that showed a negative impact of low income on diet quality, fibre intake, and milk intake41,42,43. Additionally, our supplementary analyses revealed that, after further controlling for income as well as qualifications, low partial fibre group did no longer have reduced general cognitive ability scores compared to low/medium and medium/high partial fibre intake groups, but this was not the case for milk intake (See Supplementary File Sections 2.3 and 2.4).

Although strengths and limitations of analysing UKB data, and adopting a fairly identical research approach as in the current study, were assessed elsewhere10, we would like to briefly mention the main limitation of this study. Unfortunately, we could not include total energy intake, an important confounder, in our analyses, due to unavailability of such data in the UKB FFQ. However, we controlled for BMI instead, which has been found to be a better estimate of objectively measured total energy expenditure (and therefore true energy intake) than estimated energy intake from a food-frequency questionnaire44. Also, our findings should be interpreted cautiously, as underlying cognitive deficits in the UKB participants might have negatively affected their dietary habits.

To sum up, in the current study, we observed positive associations between general cognitive ability and higher intakes of fish, unprocessed red meat, and moderate intakes of fibre and milk. Interestingly, higher intakes of vegetables and fruits (and higher healthy diet scores: where higher scores could be obtained by consuming higher amounts of vegetables, fruits, and wholegrains, but lower amounts of meat) were negatively associated with general cognitive ability. Although our findings emphasize the importance of nutrients derived from fish and unprocessed red meat for general cognitive ability, they also raise questions regarding the applicability of a ‘one-diet-cures-all’ approach, as higher vegetable, fruit, or fibre intake were found to be positively associated with better sleep and mental health in our earlier study10, but not with cognition in the current study. In other words, the same dietary patterns/food groups could affect health and wellbeing outcomes differently. Aside from the aforementioned suggestions, future research is needed to identify domain-specific effects of dietary patterns/food groups on a wide range of cognitive and affective outcomes.